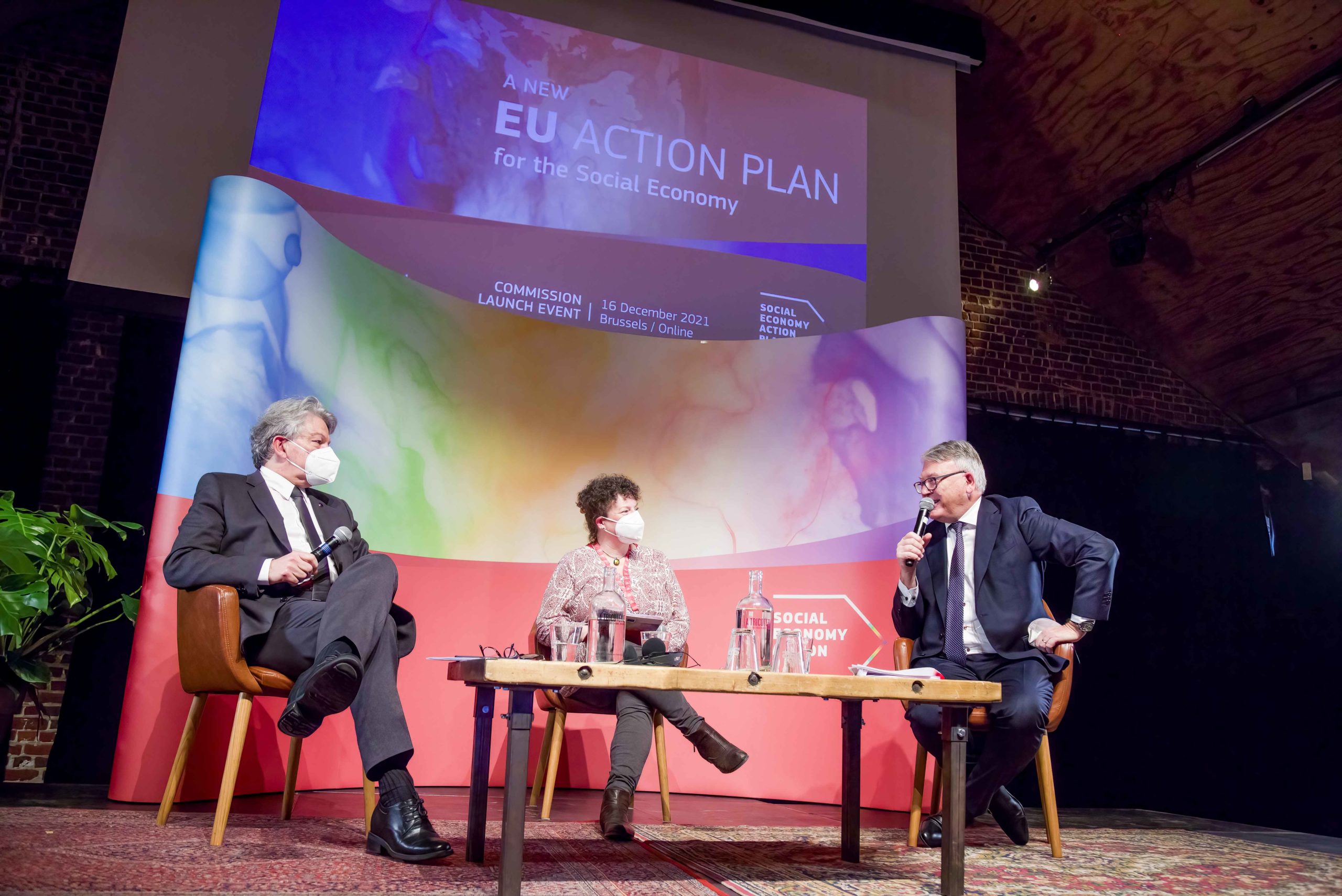 At the beginning of December, Belgian children eagerly await the arrival of Saint Nicholas, who, following tradition, brings them small gifts, tangerines and cinnamon cookies or “speculoos”. For those of us who work in Brussels in the Social Economy sector, this year Saint Nicholas has brought us a huge gift: a European plan to promote the development of the social economy in Europe in the coming years. Our particular Saint Nicholas this year has been the Luxembourg European Commissioner Nicolas Schmit, a nice coincidence, who in turn was commissioned by the President of the European Commission, Ursula von der Leyen. Nicolas Schmit’s team and European Commission officials have worked tirelessly in 2021, from their homes and in the midst of a pandemic, not to disappoint those of us who have been waiting for this gift for a long time. And it is only fair to congratulate them on that.

The European Commission has publicly presented the SEAP – Social Economy Action Plan in a joint press conference of the Vice-President of the European Commission Valdis Dombrovskis and Commissioner Schmit, which gives an idea of ​​the level of strategic importance attributed to this sector. Getting to this point has not been easy and we must also congratulate all of us who work in favor of the social economy. We celebrate this milestone, those of us who work it in Brussels representing the entities of the social economy and those who work daily in associations, cooperatives, mutuals, foundations and ethical financing entities in Belgium, France, Italy, Portugal or Spain, where this business model and this vision of solidarity and participation in society are more developed, and in all other countries where they are still growing.

A long journey to get here

To get here, those of us who believed in the social economy have gone through a long journey in the desert. A decade in which the business model promoted by European institutions, in response to the financial crisis and as a bet for the future, was the model for innovative start-ups and impact companies. Newly created social enterprises, through which a small team launches a new product or service that has a positive impact on society or the environment. A model by which it seeks to solve social problems, through business innovation, without depending on public subsidies and using private capital for their development. This model, which clearly has its merits and advantages, must continue to be developed to demonstrate and its effectiveness, both at a business and social level.

Our frustration in recent years was linked to the fact that the European institutions exclusively promoted this unique model of private equity social enterprise, and at the same time ignored the reality of the social economy. A much more developed business sector, which has 2.8M companies, which generates 13.6M jobs in Europe and which contributes 8% to the European GDP, the same as the automobile industry. A resilient sector, which withstands crises well, which generates stable employment and economic development at the local level. And above all, a sector with ethical values ​​that are the essence of its social impact, such as the primacy of people and the social mission over profit, the reinvestment of profits in favor of the collective interest or of society and democratic and participatory governance.

It took constant work, of several years, carried out according to the values ​​of the social economy. A collective, supportive, participatory and democratic effort by a good number of organizations, and in which FEBEA has been actively involved, to develop an alternative narrative that would value the merits of the social economy, its economic contribution, its social impact and its development potential across Europe. And here it is necessary to underline the role of Social Economy Europe, as an umbrella organization, which has patiently gathered the different families of the social economy – cooperatives, mutuals, foundations, associations and social funders, has built a coalition of European governments in favor of the Social Economy and has mobilized a wide group of European parliamentarians from different parties through the Social Economy Intergroup, as well as regions, experts and other civil society actors.

This common effort, a veritable tide of the social economy, has ended up changing the course of European politics, which is like moving a mountain. All this has crystallised in this plan that includes multiple measures to be developed in the next decade; it has given the social economy a transversal role that goes beyond a specific policy, with a development objective in all the countries of Europe, and as a virtuous concept to be exported to neighbouring countries and friends of Europe on other continents.

The social economy as a model of future economic development

But, above all, the greatest virtue of this plan is that through it, Europe proposes the social economy as a model of future economic development based on innovation, social inclusion and regeneration of the territory and the environment. And, furthermore, and this may be less visible but even more important, this plan in favour of the social economy connects the European institutions with the collective effort of thousands of European citizens, who every day contribute to building a more democratic, more supportive and more resilient Europe.

What does it mean for Ethical Finance actors

For us Ethical Finance actors, this plan affects us in two ways. In the first place, as organizations that are an integral part of the social economy: we have cooperative, democratic and participatory organizational models and with a clear and ambitious social mission to channel the money of citizens towards organizations that work to solve social problems and regenerate society and the environment. This plan is also for us. Secondly, this plan is designed to promote the development of the social economy. And this can be a huge boost to our economic model, since we are specialized in financing social economy organizations and it is also our main raison d’être. Therefore, the more the social economy sector grows, the more we can contribute by financing this development and the more the activity of ethical finance entities will grow.

A commitment to fully exploit the Plan’s opportunities

So let us now enjoy this moment of celebration and the good prospects that lie before us. And let us continue working in the coming years from FEBEA and with each of our members, so that the potential that this plan represents is translated into a stronger, more inclusive and more regenerative social economy in our respective countries and territories. And let us also take advantage of this tailwind so that at the same time as the social economy develops, we develop ethical finance also in new countries and territories in Europe.

Every December, in the coming years, Saint Nicolas will return to Brussels and Belgian boys and girls will continue to receive his gifts. For the social economy, there will rarely be a December like this again. It is our responsibility to realize all the opportunities that present themselves to us. The actors of the social economy and the European institutions can count on FEBEA and its members to build the European social economy of the future.

This article was published in Spanish on Valor Social