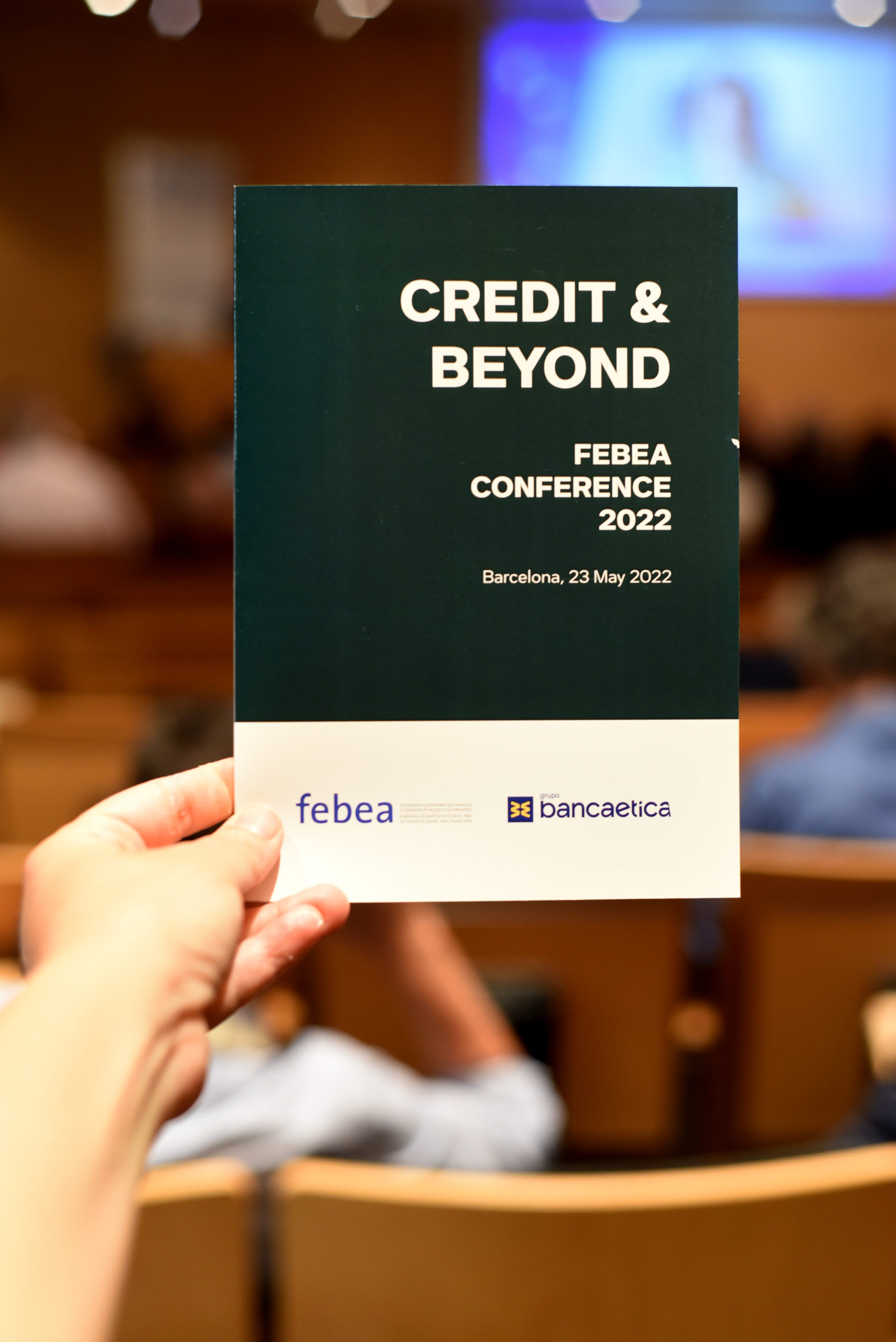 More than 120 people representing different European countries (Austria, France, Ireland, Spain, …) have gathered in Barcelona, ​​at the annual Conference of FEBEA. After three years without the possibility of meeting due to the pandemic, the members have discussed the consolidation and growth of their way of doing and understanding the economy, positioning themselves as “more than sustainable”.

Under the title “Credit & Beyond“, the conference highlighted the consolidation of the work carried out by ethical finance in recent decades, as well as its purpose of positioning itself as a financing reference for the social economy and benchmark for a conception of sustainability that goes beyond an environmental-only approach. “We are financial intermediaries, but we are much more than operators in the financial market. The principles, the values, the style of operation that we publicly commit ourselves to develop, are worth it. It is not mere differentiation. It is not “greenwashing”, it is not “pinkwashing”, “solidaritywashing”… The approach of ethical finance, its purpose, are adapted to face the moments we have lived and are living“, said Pedro M. Sasia, president of FEBEA, in the presentation of the event.

The different interventions of the inauguration built on this idea. Thus, Ruth Paserman, from the General Directorate for Employment, Social Affairs and Inclusion of the European Commission, highlighted the support that ethical finance has provided to social economy companies during the pandemic and Janet Sanz, deputy mayor of the City Council of Barcelona, ​​has summoned the administrations to support this work of ethical finance: “Ethical banking is no longer a utopia, it is now a reality. Now it is the turn of the administrations. It is important that we commit ourselves, not only at the local level but also from all administrative levels, incorporating them into our management, giving determined and unequivocal support to the social and solidarity economy, because it is the one that has the social and environmental return for the citizenship“.

For his part, Ugo Biggeri, current president of Etica SGR and representative of the Banca Etica Group at the Conference, highlighted the importance of the mix of actors present at FEBEA, pointing out that both financial actors and more activist entities participate in the network with the same commitment and representation which makes this European network important to openly coordinate and carry out important political activism work at the European level.

The role of public policies to promote the social economy through ethical finance has been the subject of one of the round tables of the day. In it, Álvaro Porro, director of the Barcelona World Capital of Sustainable Food 2021 program and Food Policy Commissioner of the Barcelona City Council, has focused on the challenges of joint work between ethical banking and administrations to overcome the mistrust that sometimes leads administrations to ignore what ethical banking is and how it works. In this sense, he has expressed the importance of  “scaling up, making visible and generating instruments that are close to the needs of the fabric of the social economy. Scaling is important, otherwise we will always be playing in the league of the periphery”, for this reason, he explains, perhaps the sharing of risks between the administration and ethical finance entities could be a field to explore, such as, for example, the tool of refundable aid.

For her part, Maravillas Espín, general director of Self-Employment, Social Economy and Corporate Social Responsibility of the Ministry of Labor and Social Economy, highlighted two challenges for the ethical finance sector. On the one hand, she agreed on the need to increase the visibility of the work carried out by ethical finances and the social economy, especially trying to find value links with younger people, and she also considered it important to take advantage of the current moment to focus investment on necessary transitions such as the digital transition or the ecological transition. The participation of Maravillas Espín has reinforced the brief intervention of Yolanda Díaz, Minister of Labor and Social Economy, who through a video message has highlighted how ethical finance organizations show that “democratic governance, solidarity and sustainability can work together for the primacy of people in economic development”. 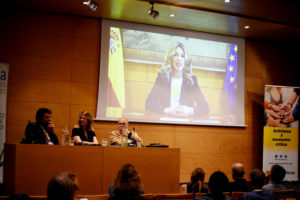 Cristina Dumitrescu, investment director of the inclusive finance team of the European Investment Fund (EIF), in addition to emphasizing the role of ethical finance in making it visible that there are other ways of doing business, has pointed out the importance of educating society and also social entrepreneurs about other forms of financing and also focused on the need to “implement instruments to measure the impact of ethical finance in the social economy but also the impact of the social and solidarity economy in society” .

The director of CREDAL, Isabelle Philippe, a Belgian entity member of FEBEA, has summarized the values ​​that, in her opinion, collaboration between public administrations and ethical finance should have: simplicity, connection with the local, coordination, innovation and vision. Finally, Víctor Meseguer, director of Social Economy Europe, a leading European network of social economy entities, highlighted the importance of networking between ethical finance and the social economy, to reinforce each other, pointing out that “ethical banks are social economy, we are family, together we have to continue working to conquer new spaces».

Innovative financing tools at the service of transformation

After these interventions, a round table was held, with FEBEA member entities, in which practical experiences on innovative financing tools for social economy companies were presented. Representatives of the Spanish financial cooperative entity Fiare Banca Etica, the French La Nef, the Austrian group Erste and the French cooperative Les Scop participated. All of them have mentioned the importance of supporting the digitization of social economy companies, as well as the importance of understanding local problems and finding the right local partners to be able to develop financing tools appropriate to the needs of the social economy. 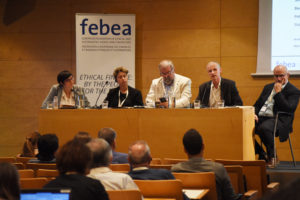 Jordi Vía, an expert in social and solidarity economy and current president of FETS (Finançament Ètic i Solidari), made a speech on transformative economies, highlighting as an “essential socio-political dimension the fact that the financing of the ethical finance for transformation economies as a whole is oriented towards an explicit strategy to support the deployment of the eco-social transition”, promoting socially useful productive activities, fostering a change in the consumption model to make it responsible and sustainable, and actively participating in economic, social and supportive networks.

The day ended with a round table of local support experiences that go beyond mere financing. In this sense, Fundación Seira has shared its experience of generating non-speculative investment funds to finance projects in alliance with the public administration. Fundacion Finnazas Eticas has explained its experience in training issues, highlighting the importance of including ethical finance in the educational field, and also reported on the creation of several funds to support local projects, some of them also with the support of public administration. For its part, Coop 57 spoke about access to credit from a non-banking point of view and shared its experience in buying land for community-type projects. Finally, Arç Cooperativa has drawn attention to the importance of ethical insurance, given the power of the insurance sector, and has shared the progress of recent years with the generation of its own ethical insurance certification. All of them have underlined the importance of alliances and collaboration, as well as the relevance of knowing how to identify the needs of the social economy in order to be able to provide responses from different spheres. 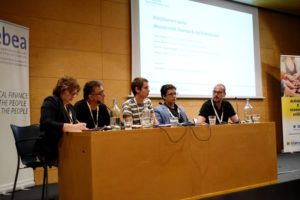 At the time of the conclusions, Daniel Sorrosal, secretary general of FEBEA, highlighted that “ethical finance is a real alternative, an opportunity to put people at the center, and this makes the sector a natural partner for those who policies decide”, pointing out FEBEA’s will to increase its activity and extend the network at a European level, creating alliances with new partners, perhaps outside the usual scope of collaboration. For his part, Carlos Ascunce, president of Fundacion Finanzas Eticas, wanted to end the Conference by highlighting the transformative role of ethical finance and how the FEBEA network promotes and builds cultural, social, political and economic practices that are clearly transformative, from a perspective of citizen participation: “cooperative and transformative finance, decisive for the construction of inclusive, democratic, ecological and feminist socioeconomic ecosystems. Finances whose main purpose is caring for life, and sustaining that present and future life”.

*The annual Conference of FEBEA 2022 has taken place in Barcelona, ​​on May 23, 2022. Through the YouTube channel of Fundacion Finanzas Eticas you can access the recording of the conference:

All photos by Marta Ruiz Jadraque