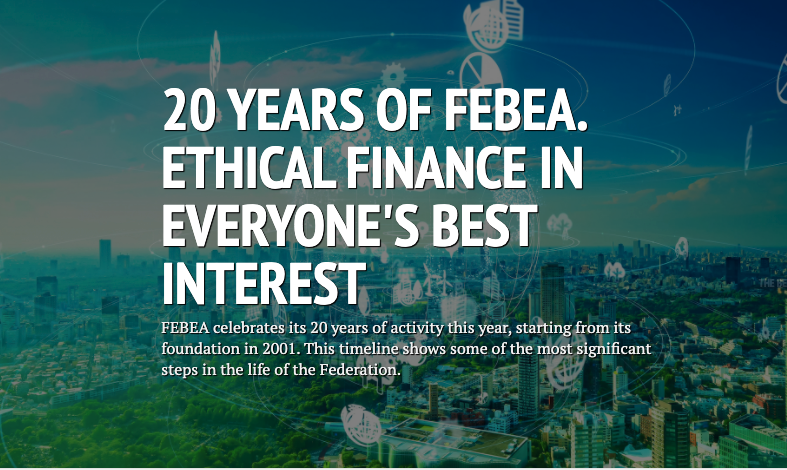 FEBEA celebrates its 20 years of activity this year, starting from its foundation in 2001. The infographic below shows some of the most significant steps in the life of the Federation: the first years, under the guidance of Jean Paul Vigier, were focused on the creation of common tools and the expansion of the membership (from 6 to 25 members in 6 years). The first years also saw a change in the strategic objectives: the operational difficulties encountered in the attempt to create a European ethical bank led the Federation to focus on new objectives to strengthen the members.

The following years, under the presidency of Karol Sachs, saw the development of collaborative activities between the members such as thematic working groups and joint strategic investments. During these years, the “Europe Active” initiative, the collective reflection on the definition of Ethical Finance – also in response to the 2008 financial crisis – and the publication of the Atlas on good practices on job inclusion were developed.

Starting from 2011, with the presidency of Fabio Salviato, the Federation began to equip itself with a more defined structure through the collaboration of the members. The collaboration with European institutions, in particular the European Investment Fund and the European Commission, for the implementation of the EaSI program through social finance tools, is progressively strengthened. FEBEA is selected for the GECES, the European Commission’s expert group for the social economy. Research activities are also activated on the management of impacts and on the operating model of Ethical Finance institutions (REAB report).

Under the Presidency of Pedro M. Sasia, starting from 2017, a restructuring process was started, leading the Federation to equip itself with its own dedicated staff and an operational headquarters in Brussels. Project activities with partners and universities in Europe are strengthened, and FEBEA becomes a member of Social Economy Europe, to represent the main funders of the social economy in Europe. Advocacy and communication activities are relaunched with publications dedicated to the measures activated by the members in response to the pandemic and to the position on the European agenda on Sustainable Finance. At the operational level, the membership procedure is reviewed and a process of collective reflection is launched with the members (“Kairos”), leading to the drafting of the new strategic plan 2022 – 2025.

27.05.2021 – EUSES – SOCIAL FINANCE IN EUROPE: A STRONG LEVERAGE TOWARDS AN INCLUSIVE AND GREEN EUROPE